This Blog carries Information, Views, Reviews, Debates & Discussions on various issues in the World. These are my personal views and should be quoted for any means outside the current forum. 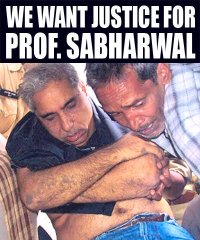 Criminalization of politics in India is a disturbing reality. Instances of violence -murder hooliganism, vandalism etc has seen an immense rise in recent years in the Indian politico-social scene. This is patronized by Senior Leaders of political parties unable to isolate themselves from such forces within their party and acquiesced by the inaction of the law abiding civil society. The bureaucracy and Courts of Law, it appears have also not been able to isolate itself from such influences and pressures. The Higher Judiciary has only reacted symptomatically, but the writs of law hardly act to wipe out the malaise. Abysmally, poor rates of conviction, long duration of criminal trials contribute to embolden the miscreants to imagine themselves, above the law. The Media has contributed immensely to bring such instances to light but has met with thick skinned or inadequate response from political forums.

Who was Prof. Sabharwal?

The Late Prof. Harbhajan Singh Sabharwal Served as a Professor of Political Science at Madhav College, Ujjain (M.P) at the time of his murder on the 26th of August’2006. He, while on student election duty, was murdered in cold blood by some of the members of the Hindu Fundamentalist fascist group and its student wing on the fateful day.
Professor H.S. Sabharwal was a self made man who had emerged through quite testing times after his family had migrated from Sargoda(now in Pakistan) in the riots of 1947. Having lost his father in his infancy Professor Sabharwal struggled to get his education and went on to do a Doctorate in Political Science from the same college where he taught while working alongside in the P.W.D. to fend for a family of four. A philanthropist and a philosopher by approach, a jovial optimist by nature had a heart of gold and was widely reputed so. He was visibly far ahead of his times.
Professor H.S. Sabharwal was a courageous man, always known to stand up for a just cause. He was a brilliant Orator and an equally good hockey player. He was the youngest Dean Students Welfare at Vikram University, Ujjain for two consecutive terms and also the head of department for political science.

What happened in his case?

The murder of Prof. Sabharwal took place in full view of all the other professors, nearly 200 strong police force stationed on election duty and was filmed by local cable channels. Despite this the police seem unable to secure a conviction. 4 police personnel who were witnesses to the episode have turned hostile. None of the other police officers and professors identified the killers out of fear. Media reports suggest that key eye witnesses, (who were mere peons) and had identified the killers before the police had been threatened and therefore turned hostile. No court ever took notice of this to order any witness protection. The investigation and trial according to his son Himanshu Sabharwal had been manipulated by the political executive of the State of Madhya Pradesh and influenced by the sitting Chief Minister. Media showed graphic video details of the lavish treatment the accused received in jail. The sitting Chief Minister went to pay respects to one of the accused in case in the hospital. Himanshu Sabharwal showed immense resolve to pursue his father’s killers. He received tremendous support from the media , other political parties, educational institutions and the public at large. He participated at the trial of his father’s death but sensing blatant biases approached the Supreme Court of India assailing the investigation and trial, as biased. The Supreme Court gave partial reprieve by merely transferring the trial but did not transfer the investigation to an impartial agency like the CBI. The judgment was matter of immense adverse critical comment from the legal fraternity.

With this background the NGO was formed with the following Objectives.

Savola has signed an agreement with Alhokair to buy Geant supermarket outlets in the Kingdom, it said in a statement posted on the bourse website.

“We are taking all the Geant stores in the kingdom, they are 11,” Savola’s Chief Executive Sami Baroum told Reuters.

The deal will enable Savola’s retail arm Azizia Panda to raise to 8 from 7 percent its share of the Saudi retail market and would increase its turnover by 13 percent, the company said.

The deal gives Alhokair, a major fashion retailer and commercial malls developer, the option to buy a 10 percent stake in Azizia Panda three years after the signature of the agreement.

“Alhokair is a major retail player with long experience in the development of malls and fashion retail. We want to benefit from this experience,” Baroum said. “Whether he agrees to buy the 10 percent or not, Geant stores will remain with us”.

Savola hopes that Azizia Panda would take within five years a 10 percent share of the Saudi retail market which it estimated to be currently generating a turnover of 96 billion riyals per year.

“Organic growth will be the way forward for Azizia to get to 10 percent market share. I don’t see at this point prospects for new acquisitions,” Baroum said.

The deal with Alhokair is Azizia Panda’s second acquisition in two years. In February 2008, Azizia announced the purchase of Giant Stores from private Saudi conglomerate Al-Muhaidib Group under a share swap deal. (Reuters)